Not for those afraid of heights…

“But it’s raining!”.  Sorry, it’s going to take more than rain to stop a couple of Brits from climbing the 367 exposed steps to the top of the viewing platform on Lupu Bridge, after walking over an hour to get there.  The second-longest arch bridge in the world, Lupu Bridge spans the Huangpu River due South of where we live, and offers fantastic views of the city.  Or probably would have done were it not raining.  It’s not somewhere you should head for if vertigo (or acrophobia) is an issue, since the steps climb the outside of the arch with not a great deal to separate you from the river (or road) below. 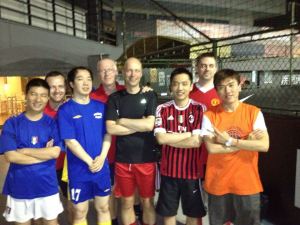 Climbing Lupu Bridge was a bit of an achievement, if only to prove my legs were working once again after playing football on Thursday evening.  For 2 ½ hours.  Well, perhaps a slight exaggeration; 20 of us on a 5-a-side pitch meant plenty of breaks in the 150 minutes we had available, but still more than enough exercise for me seeing as I last played 5-a-side in about 2006.

The Euro 2012 Championships have given us (well, me – Bron chose sleeping as a more preferable alternative) a few late nights this week.  Monday’s England match wasn’t too bad with its midnight kick-off local time, but Friday night’s game – Saturday morning here – was a bit of an effort.  Having kick-off delayed by 15 minutes to 3am was also not ideal.  The England win made it slightly more bearable, but leaving a bar when it’s light outside (when dark upon entry) never feels quite right.  Especially when the old Shanghainese have already appeared to start their morning Tai Chi rituals.  Bed for me at 5.30am as the old folk begin their exercises.

Saturday daytime was largely spent resting (both understandable and acceptable under the circumstances I think!) but we did manage a short walk to explore Dean’s Bottle Shop, and were forced to suffer a couple of pit-stops on the way home (life’s essentials: mango rum blended cocktails and passion fruit mojitos).  I think I’m starting to worry people – it’s not just Prosecco and cocktails though; I did actually buy some real ale from Dean’s well-stocked shop. 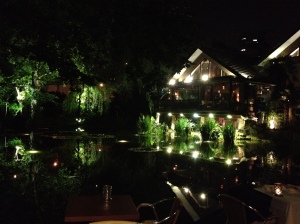 Only a couple of nights out this week – on Tuesday night Andrew took Richard and me to an Islamic restaurant near the office.  I’m not sure if in Islamic countries the waitresses dance between the tables with soup bowls on their heads, but they did here.  Camel meat hadn’t been top of my list of foods to try (or to expect) in China but it was on the menu, so appeared on the table: tasted a little like hardened luncheon meat.  The rest of the food was excellent (if less exotic), and probably explained the hour’s wait for a table.
On Friday night, Bron and I met up with Tim and Sarah to visit Bali Laguna, an Indonesian restaurant recommended to us by Rachel.  A venue definitely living up to its billing, with a glorious setting in Jing’An park.  Sat outside in the cooling evening air with the mosquitos mysteriously absent, we had a great evening with superb food, entertaining company and  beer.  Yes, definitely beer.

And certainly one of the highlights of the week was Bronwen’s home-cooked curry on Saturday night (yes, our first Saturday night at home since moving here!).   I love the food here in Shanghai, and you’re certainly never short of varieties/flavours to try, but I haven’t half missed a proper, home cooked spicy curry.  Bloody lovely.

View down the steps…

Bron on the Viewing Platform – it may have been raining…

Not for those afraid of heights…