On the beach late at night…

The sea always looks more appealing in the dark.  Of indeterminable colour and levels of cleanliness, the moonlit sea offers a different perspective to that available to the normal hordes of daytime beach visitors.  On Saturday evening, following our trip to Qingdao’s beer festival, the group of people we’d adopted(/been adopted by) headed down to the beach to experience the warmth of the late night Yellow Sea .   A few people paddling (Richard heading off into the distance for a while); a few straight into the sea for a full-on swim and a few observers bemused by it all.  After a couple of hours, and with our small group now swollen in numbers, Bron and I made a dignified exit as the newcomers continued to lower the group’s average age. 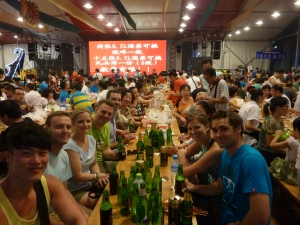 Inside one of the tents with our new temporary friends.

Qingdao beer festival vs. Olney beer festival then.  Olney wins for beer, friends and relaxation.  Qingdao wins for sheer unpredictability.   We’d met Arey, an American bloke teaching economics in Nanjing, whilst queuing for free tickets*.  Brad, an Australian we found ensconced by an air conditioning unit, also joined us as we wandered from bizarre beer tent to bizarre beer tent.  We met up with Richard around the same time as a few of Arey’s friends appeared and managed to find a table big enough to accommodate all of us in one of the less noisy tents.  Our evening meal – home-prepared seafood and sausages  – provided for free by some lovely, generous Chinese ladies sat next to us.  I’m not sure whether it was pity or sheer generosity, but Richard, Brad and I were incredibly appreciative (the rest of the table missing out due to lack of proximity to our friendly ladies).

Beers from all over the world, but not a single British beer to be found (and I have no idea how Budweiser managed to sneak their way in).  A few decent dark German beers did the job, with the festival closing relatively early (a little after ten).  It was then that somebody had the bright idea of heading down towards the sea.

It’s a strange phenomenon in which people of different nationalities are drawn together simply by being laowai (a casual Chinese word for foreigner).  There’s a shared perspective seemingly unique to China and is on occasion one of the highlights of living here.  There’s a point at which age doesn’t come into it (as the pictures attest), but the later the night became, the older we began to feel.  I have no idea what time our temporary friends decided to call it a night.

Bron on one of Qingdao’s several beaches

The rest of our weekend in Qingdao was more cultural in nature; visits to various seafront exhibits and a shedload of walking along the extended coastline.  Many thanks to Anny (our Chinese Finance Director) for allowing us to stay in her house; a few strange looks from her neighbours but a great base for our Qingdao exploration.  Qingdao is a mixture of a beautiful coastline, mountains and scenery Shanghai could only dream of.  It also appears to have some of the worst roads in China, with the traffic forced to crawl along due to the potholes, divots and missing surfaces in abundance.

Halfway down Qingdao’s crowded, popular pier, we noticed a few men dressed as terrorists with fake guns and hidden faces.  I’m not sure if anywhere else in the world posing to have your photo taken with a fake gun pointed at you would be considered a tourist attraction.

Our trip to Qingdao was supposed to give us a relaxing break away from our recent hectic couple of weeks in Shanghai.  On Wednesday we’d been over to Isaac and Chong’s nearby apartment to experience their ayi’s Indian cooking skills.  Available for hire in October, we’ll definitely be trying to make use of her services.  On Thursday night we’d been to a strange old Japanese restaurant over in Pudong (deep fried everything) to say goodbye to Simone as she heads back to Germany, hopefully returning later in the year.

Back to work tomorrow.

*”If you’re not Chinese, ring this number for free tickets” said the online message.  We did, it worked. It saved us the equivalent of £1.

Bron on one of Qingdao’s several beaches

Brides and bridegrooms on the beach

The main reason for our visit to Qingdao

View of the beer festival early on

Inside one of the tents with our new temporary friends.

Me and Bron after the beer festival

Me, Bron and Richard after the beer festival

On the way to the beach

On the beach late at night…

When the tide comes in, things get busy

Bron on the pier

Does what it says on the tin…

Bron outside the Olympic structure thingy