Exactly how much of a change in temperature does 60 degrees feel like? From around 35 degrees in Bangkok less than two weeks’ ago to colder than -25 this weekend in Harbin.  As a species, we humans are pretty adaptable.

Around 500km from the Russian border, north west of Beijing, Harbin is a city famous for its annual snow and ice festival.  And nutters diving into near-freezing water in a cleared area of an otherwise frozen lake (2 metres thick of ice).  Of those appearing in swimming attire and braving the water,  I don’t think any were below 50 years old and most appeared over 60.  Whether this means the youngsters are too scared or the older folks have spent their entire life preparing for the moment is a bit of a mystery. 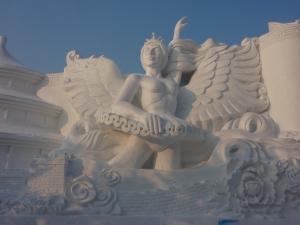 Bronwen made a fairly decent gnome snowman a couple of years ago (small in height but not in stature, commanding the garden as he did) and this took some time to create.  The sheer size and intricacy of some of the exhibits in the Sun Island Snow Sculpture Park felt like they must have been years in the making.  Walls of snow tightly packed and sculpted into remarkable, perfect detail.  Some of them not just for visual effect either, with a snow castle allowing its visitors to climb to the top and then proceed down a snow slide in a rubber tube.  Most people holding on tightly, Bronwen holding on less so after being unceremoniously shoved down before having a chance to grab the tube’s handles.

This being China, the tranquil nature of the snow sculpture park had to be interrupted at some point.  And why would you not have 30 or so completely random mascots (Tigger, a few Tellitubbies, Porky Pig, etc.) dancing to Gangnam Style?

Since Harbin is in the north of China, a Siberian Tiger Park seems appropriate.  Our guide proudly declared there to be over 1000 tigers living there, and we’d been told in advance we were able to purchase live animals to feed to the tigers. Live animals of unknown species or origin.  Nobody in our group decided to do so, but the tigers weren’t going hungry.  The staff provided live chickens, dangled on wooden poles, hoisted up and down to both torment the tigers and torture the chickens.  Whilst seeing the tigers roaming relatively freely is an incredible sight, and one could argue live food is what they’re use to eating, killing a chicken doesn’t seem like much of a challenge.  Other animals (to select as food) were apparently available; I can’t say we were too upset we didn’t get to see that particular sight.

After a couple of hours out in the cold it’s obviously great to get back to the comfort of our luxury transport.  15 degrees it said on the digital thermometer inside the coach, which would have been wonderfully warming if true.  At -9 degrees we discovered the thermometer didn’t have room to show the “-“ sign when showing minus double digits.  Although, to be fair, it did reach +9 at one point. 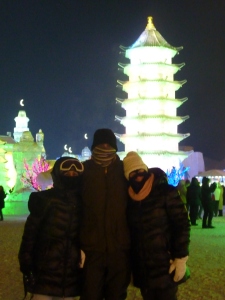 In disguise – Yael, me and Nicole

We spent Saturday evening at Harbin’s Ice and Snow World, which was kind of like a world of snow and ice.  Chaos to get in (Chinese-style queue*) and chaos to try and experience the sights (you may well climb the ice mountain to slide down the ice slide but do not dare hesitate on your way up).  The ice slide could have done with being little more icy, since I spent half the journey down straddling a poor Chinese bloke in front of me as he became stuck in front whilst Bron and Nicole became impatient behind.

With the temperature approaching -30, I think most of us were glad to eventually retreat to the hotel despite the incredible displays on offer.  There’s only so much you can take in whilst your feet gradually switch themselves off.

Unfortunately one of the group suffered an injury after sliding and falling backwards onto his head.  A night in hospital in Harbin and a slow trip back to Shanghai awaits (since the doctors did not want him to fly).  At the time of writing, I hear he is feeling much better and a second scan has apparently revealed all is OK.

We awoke early on Sunday morning to experience the majesty of the previously mentioned snow swimming.

We made our way back to Shanghai via a very busy Harbin airport on Sunday afternoon with many tourists making their way back to warmer climates.  This meant the many layers of clothing had to be removed whilst in the airport, and many people having the same idea: head to the two solitary locker changing rooms (getting changed in the airport toilets would have been unthinkable – I checked).  With a Chinese queue forming, we gave up and practiced national stereotypes by getting changed without waiting for the lockers: Bronwen and I hid behind some kind of cleaning vehicle whist Stefan (German) just got changed out in the open.  Gabrielle gracefully discarded anything unwanted whilst maintaining both dignity and her Canadian coolness.

It was 5 degrees in Shanghai when we landed on Sunday night.  It felt tropical.

*A vague queue unless somebody happens to just walk to the front at an opportune moment.

Not cold at all…

One leap to catch the chicken

Lunch for the tigers…

A castle made of snow (to climb and slide down)

Bron after sliding down the snow castle

Nicole and Bron inside the Ice and Snow World

Bron being mugged on the ice slide

In disguise – Yael, me and Nicole

Why would you choose to swim in this?

Icicles where I’ve never had them before

Perfect for a drive on the ice