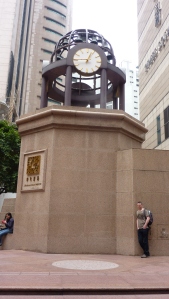 Hong Kong offers those tourists not willing to go the extra mile a glimpse into Chinese life. But to suggest to the locals that they are identical in behaviour or culture to their mainland neighbours is akin to calling a Scouser a Manc (OK, not quite that bad). The Hongkongese speak Cantonese, not Mandarin; they rarely spit in the streets; they do not incessantly beep their horns. They’re fiercely protective of life as they’ve become accustomed; reluctant to change and suspicious of any attempts to get them to do so. It is a very different experience to mainland China, but does that make it in any way better? I’ll leave that one alone…

Adam, Heather, Bron and Me overlooking the Kowloon skyline

Our arrival into Hong Kong was less than ideal – a delayed flight resulting in a 1.30am Saturday arrival. Since we’d arrived from Shanghai, home of H7N9, the passengers were greeted by a man aiming a temperature gun at their foreheads. Never mind immigration, I’m convinced a reading above 37c would have resulted in refused permission to proceed beyond the exit of the contraption* leading from the plane to the airport gate. Hong Kong airport has a convenient train to take passengers from remote gates to immigration; this train stops running at 12.30am. So we arrived at the hotel around 3am, tired, grumpy and a little disturbed at the vision of the future Hong Kong offers – where surgical face masks are commonplace and social interaction via facial expressions is limited to interpretation of eye movements and intense study of dancing eyebrows. There’s a joke in there somewhere: a man and a woman both wears surgical masks go on a date…

I would like to know what happens when mask wearers are eating? Or do they never eat in public?

Me, Bron, Danny and Carmen… Happy despite the very dull Liverpool game.

Ours was a somewhat enforced trip, but we took advantage of the opportunity to say goodbye to Heather & Adam and Carmen & Danny. Heather taking us to experience some fine barbecued Hong Kong food on Saturday night followed by a traditional Sunday dim sum; Carmen taking us back to the first restaurant we ever visited in Hong Kong. Very fitting as a first and probably last dinner in Hong Kong.

*I’m sure it has a technical term. “Contraption” probably isn’t it. 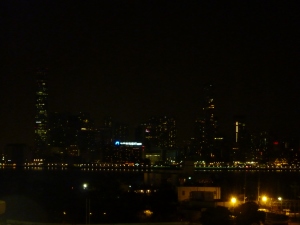