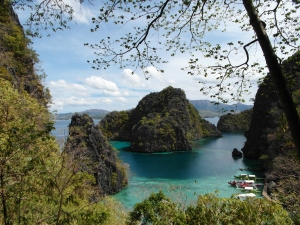 The explanation for why Bronwen now has three fish bite marks on her legs is a good one: “The tourists here feed bread to the fish,” explains our tour guide, “and because your wife is so white, the fish mistook her for white bread”. Little consolation for Bron, peacefully snorkeling her way through the many coral reefs off Busuanga island in the Philippines.

Our trip began in the capital, Manila: in the district of Makita featuring a distinctly Southern American feel, with Cuban bars, Mexican restaurants and plenty of street tacos available.  But when it’s so hot outside (we managed to time our visit with the hottest day of the year so far: 38 degrees) the inclination to go wandering  is not so great.  We declined the horse-drawn carriages and offer to explore the old town by “chariot” (Segway), instead opting for darting from shaded cover to shaded cover as we explored the Fort Santiago and cobbled streets of Intramuros on foot.

No jet engines for us

I had a sneaking suspicion that the plane to take us from Manila to the island of Busuanga wasn’t going to be huge, but I still expected it to have jet engines. Unfortunately, propellers were the only mode of propulsion on offer.

We landed in the smallest airport I’ve ever encountered*, with luggage being handed out directly rather than put on any kind of conveyor belt.  No security gates or checkpoints on the way out of airport, unless we’re including cattle grids.

Our shuttle bus took us directly to our hotel in Coron, the main town on Busuanga island (although confusingly Coron Town faces rather than resides on Coron island).

Bron on our island-hopping boat

The last time I went snorkeling was somewhere off the south coast of the UK, where the sea hides its treasure in the murk, and the icy cold water limits time spent in the sea to a minimum.  If there is an opposite, the Philippines provides it.  Pristine, almost translucent waters, mile after mile of coral and a sea temperature of around 25 degrees. Our ‘island hopping’ day trip from Coron took us to saltwater lakes, white sand beaches and coral abundant with fish (with some fish more dangerous than others).

After a few days in Coron town, we joined ‘Tao Philippines’ for a five day tour, fully deserving of its own blog entry.

Following the exertion of 4 nights sleeping in the semi-rough (outside, but at least we had mattresses of sorts), we headed for the luxury of an island resort for the next few days.  El Nido resort on Lagen island, here are a few tips for you:

Our last night in the Phillipines was back in Manila, this time in a hotel with bedrooms cleverly disguised as bathrooms. Saloon-style swing doors into the toilet area with a uniform tiled floor throughout: an open, very cosy layout.  Not somewhere you could share a room with a co-worker.

We’ve had an amazing, unique, couple of weeks away. Even for a non-beach person such as me, the Philippines offers an incredible array of sights and activities to keep its guests fully occupied. And to think we visited less than 1% of the 7000 or so available islands.  My body hasn’t been exposed to this much sun since Butlins, Minehead, circa 1982.  I am no longer pasty white (although I’ll give it two more weeks until normal service is resumed).

We were only 3.5 hours flying time from from Shanghai and yet the natural beauty of the landscape, the cleanliness of the sea and the lack of any air pollution made us feel like we were on a different planet.

*This before our temporary passage through El Nido airport, so small as to necessitate a holding pattern for ground transport, lest they cross the road out of the airport at the same time a plane attempts to land on it.

No jet engines for us

Our hotel in Coron Town

Bron on our island-hopping boat

Bron after climbing the 700 steps of Mount Tapyas

The cross at the top of Mount Tapyas

Our hotel in Coron Town

View from our room on Lagen Island

Our resort on Lagen Island