For those who know me well; do not worry.  What follows is not an account of some kind of spiritual awakening, nor is it an attempt to connect with my inner self (or even my middle self, content and paunch-like as it is).  And as such, If I do ever utter* anything even vaguely akin to “being at one with nature” then I vow to immediately stop the blog, come home to the UK and reconnect with my hidden Scouse self.

On Sunday we returned from another weekend away in the mountains.  This time a mere 4 ½  hour bus journey away, near a place called Anji in North Zhejiang province.  A group of 13 in total; 7 of us (including Bron and I) from a group of local friends sufficiently intrigued by the offer of hot springs atop a mountain, 5 other interested people and Jeff, our guide (a Chinese guy with a French accent  – because he lived in Denmark for 5 years).

So on Sunday lunchtime, instead of lying on the sofa watching DVDs or heading to the local supermarket, we find ourselves outdoors on top of a mountain wearing swimming gear, sitting in a Jasmine infused hot spring with the rest of the group.  We watch the cold mist spreading across the mountain through the bamboo forest (all visible from our hot spring) whilst Echo** starts to sing a traditional Chinese song (about Jasmine, funnily enough).  My brain never normally shuts off, constantly working at 100mph, so this was all a little unusual for me.  Relaxing, peaceful, and so different to anything we’re ever likely to experience in Shanghai.  No need to dress this up as anything else – just a bloody lovely way to spend a Sunday. 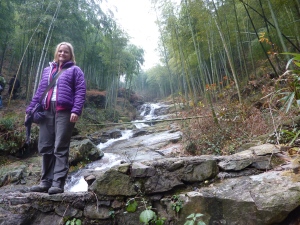 Jumping from hot spring to hot spring (for there were many) was also a great experience – a few seconds of very cold temperatures followed by long spells enjoying the warmth of the hot springs.  We also tried out the water massages, fish-that-nibble-your-feet (well, Bronwen did) and a human jet-wash – plenty of other water-based ways to keep visitors amused.

We’d met up with Jeff and co on Friday evening to begin our bus journey, arriving in the village of LongWang (literally “Dragon King”) just before midnight.  Our lodgings could be considered halfway between a hostel and a 2-star hotel – individual rooms but freezing cold.  Each room had an air-conditioner theoretically capable of blowing out hot air but in actuality only capable of circulating an asthmatically wheezed puff of tepid air at random intervals.

The start of the narrow min-canal path

On Saturday we were accompanied by the local mayor on a hike up through the mountains on 1000 year old paths leading from one village to another.  Nothing too strenuous and plenty of time to appreciate the surroundings.  High up in the mountains they’d built an ingenious mini-canal to collect the water and force it into a single point of entry in the village, providing the locals with both electricity and water.  Part of the hike involved walking along the edge of this mini-canal; the walls were about one foot wide, so with a sheer drop one side and water on the other, the hike slowed down significantly.

Before the days of technology, the village of LongWang was famous for paper made from local bamboo.  Far too much detail to go into here, but with the amount of effort required to produce a single sheet of paper (as demonstrated to us) it’s no wonder an industrialised solution was found.

Our hosts for a cup of tea halfway up a mountain

On Saturday night, our evening of food (served in part by the local mayor), Jenga and cards were accompanied by a mysteriously yellow coloured rice wine, which swiftly became the drinking punishment.  I’m quite happy playing cards but I didn’t know there was a “Love” version of Jenga.  Think of normal Jenga but with forfeits written on each block.  Our version was in Chinese with an English translation underneath; sample forfeit (verbatim) “Make a queer smile”.

So following Sunday’s hike up to the hot spring and several hours of relaxation, we had a slow, reluctant trip back to Shanghai.  Nothing spiritual going on here, but one of the best weekends we’ve had since arriving in China, with a great bunch of people.

On Thursday night we were honoured (nay, privileged) to be invited by Rachel and Andrea to join them at an American (is there any other kind?) Thanksgiving event at the Boxing Cat Brewery.  I have to admit being somewhat trepadicious for fear of being whooped and hollered to death (if Brits are occasionally like Mr Bean, then Americans are occasionally like Dog the Bounty Hunter), but despite Rachel’s attempts to secure the contrary, we ended up on a comparatively quiet floor.  Shedloads of food, free-flowing drinks (including specially brewed “pumpkin ale” which tastes a lot better than it sounds) and a top night all in all.  If China is neutral territory for the Brits and the Yanks, Bron and I were understandably outnumbered on Thursday night.  The first Thanksgiving meal I’ve had since living in the US many years ago; good to experience a little bit (well, a huge amount) of Americana here in Shanghai.  Either that or my first Christmas meal of 2012.

* if one can utter on a blog

**a footnote solely for fans of the Sega Megadrive: Echo, one of the Chinese girls in the group, not Echo the Dolphin.

The start of the narrow min-canal path

Bron & Rachel and a little bamboo

Our hosts for a cup of tea halfway up a mountain

On top of a waterfall