Nearly five years have passed since I first visited Shanghai, a city with an ineffable draw on me.  Following our reluctant departure in 2013 after little more than a year’s residence, we returned as visitors last year with a little trepidation.  With hindsight we needn’t have done so.

No such concerns or worries this year – if it’s too cliched to call it our second home, then let’s just say its a place in which we feel more at home than just about anywhere else. We know the heart of the city well enough to walk for hours without getting lost; we know just about enough Mandarin to placate angry taxi drivers; we know our favourite restaurants and bars; and we know its people: ambitious yet reserved, modern yet traditional,  energetic yet bloody slow when walking. 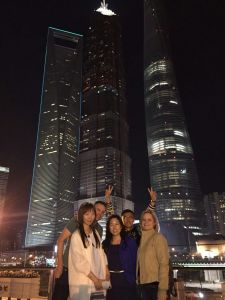 Jude, me, Rachel, Kim and Bron in front of Shanghai’s new skyline

Sandwiching our trip to Vietnam, our time in Shanghai was intentionally more social than cultural.  Whilst many of our ex-pat friends have since moved on, a few stalwarts remain along with most of our Chinese friends.  So we had a deliberately packed agenda of socialising, eating and drinking.

In Shanghai there’s no better “local” than Masse (it’s been a year but Chris, the co-owner can still greet me by name); no better cocktail bar than Closless; no better excuse to smuggle in a little rum purchased in Vietnam than a beach party south of the Bund.

From the night of bizarre Chinese entertainment (face changing magic guy who helped me knock over a beer) to being thoroughly under-dressed in one of Shanghai’s poshest restaurants (my shorts and bright orange t-shirt combo not exactly mixing well with the suits and cocktail dresses adorned by the other clientele) , we loved our brief return.  Last year we celebrated our wedding anniversary sat at the bar on a Virgin Atlantic flight; this year we celebrated eating Sichuanese food with two of our favourite Chinese families.

Thanks to everyone that found the time to meet up with us.
And yes, we’ll be back next year.  How could we not?

Jude, me, Rachel, Kim and Bron in front of Shanghai’s new skyline

Me and Jude overlooking the Bund

Me and Anny overlooking the Bund

The Bottle Opener, Jinmao Tower and new Corkscrew at night

Rachel, Kim, Bron, Jude, Anny and Me in the Traditional Chinese Restaurant

Me and Bron reminiscing in Masse, overlooking our old house

Me, Bron and Fiona, our old language teacher, at Sashas

Inside the iAPM Mall in Shanghai

Bron and a big shoe

Curry in Chong and Isaac’s apartment

View of the Jimnao Tower looking down from the Bottle Openier

Bron in the Bottle Opener

Looking up at the Bottle Opener

With Lucia, Nancy, Bron and Bella in Sichuan Citizen 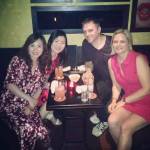 Back in Closless, with Nancy and Lucia

Party on the Bund with Bron and Rachel

Rachel and Bron at the Bund Beach Party

Rachel, Ben, Anny, Bron and Me in Mr & Mrs Bund

Shanghai from the Beach 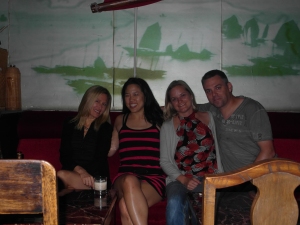 In Captain’s Hostel near the Bund: Andrea, Rachel, Bron and me.

Bron and Rachel on the Bund

In April last year, two fresh-faced, optimistic Brits boarded a plane to Shanghai in anticipation of a three-year move to China.  A little over a year later, we’re heading back in the opposite direction.

A few days after arriving last year, Bron and I headed for a pub quiz in a now-closed pub called the British Bulldog.  It was there that we met Rachel, a fresh-faced, optimistic American, herself having relatively recently arrived in the country.  Very fitting then, that we should spend our last night in China with Rachel; another of our close friends we’ve met over the last year that we will definitely remain in contact with.

Fitting also (because this is about me and Bron) that our last meal in China should be an Indian, cooked for us by Chong and Isaac’s Indian-cooking ayi.  An excellent, home-cooked curry; a shame we were never able to make more use of her culinary skills.

We followed the Indian meal with a last trip to the Bund, meeting up with Andrea and Rachel’s extra-special man friend, Ben.  A few last cocktails on the Bund (one with both baijiu – Chinese Rice Wine – and rum, tasting as bad as it sounds) to end our time in China.

Airport lounges are never the best place for me to write blogs, so I’ll end this one here.  I’ll add a few more once we’re back in the UK, and then, who knows…

Last night on the Bund

Bron and Rachel on the Bund

In Captain’s Hostel near the Bund: Andrea, Rachel, Bron and me.

Bron and Rachel under the sea, playing golf.

It wasn’t really underwater.  It was on a basement floor, below sea level, but not underwater.  Unless everything underwater is always florescent, in which case I’m mistaken.  Rachel’s idea of trying something “a little different” was certainly that – on Wednesday night, over in the New World Centre in Pudong (on the dark side of the river, where we seldom visit), we ventured into a strange world of crazy golf, Chinese style.  We declined the offer of having our own personal scorer, and stumbled through the course with our florescent golf balls and clubs.  A strange experience…. Rachel has these ideas…

The previous night’s strange experience wasn’t of Rachel’s doing.  An attempt to try out a couple of bars on the Bund before heading to the Red Door restaurant sounds innocuous enough, but after being refused entry at the Red Door for our lack of burlesque outfits to walking out of another restaurant for being insulted by the waiter over my choice of beer (amongst over things), it was another strange night.

A few more such nights await before we leave…

Rachel, me and Bron in the Lighthouse bar

View of Pudong skyline from the Lighthouse bar

Although the boat looks superimposed, it was definitely there…

A shark floats by

Look, we have florescent things 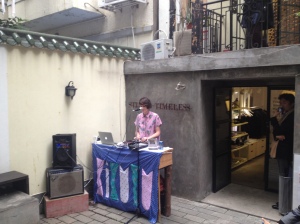 This is what I mean by an intimate gig

Whilst the masses trudge off to be Eltoned (Mr John and his weave are appearing here later this month), Bron and I prefer our live music to be somewhat more intimate.  Appearing at a tiny courtyard about a 15 minute walk away in the middle of Saturday afternoon was an Australian lady called Kikuyu, armed with a keyboard and sampler.  A venue free to enter, the organisers were also good enough to hand out free cans of beer.  And organise a free barbecue (the worried Aussie drummer from local band Pairs  insisted we filled our boots due to the masses of meat-on-a-stick that kept appearing).  I love this though – getting to speak to the artist after she’s been on stage (figuratively – see picture), being fed and watered (beered?) with maybe 20 other people.  I don’t get the mass appeal of Elton John and his ilk – Shanghai is full of live music if people are prepared to look beyond what’s being advertised on the interactive screen in the back of  taxis.* 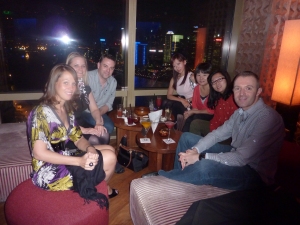 Elouise, Bron, Me, Jude, Judy, Anny and Ryan in the Vue Bar

Elsewhere over the weekend, Friday night meant a visit to a spicy Hunan restaurant followed by the Vue Bar in the South Bund to say goodbye to Jude as she departs for Canada in a couple of weeks.  The Vue Bar has a great, well, view of the Bund from a different perspective to that with which we’re  familiar, but seems to have a ban on seatbacks.  Backache for all (especially Anny).  Jude joined Bron and I in our favourite local cocktail bar (Closless) to end the night, always a great place to do so being, as it is, 2 minutes away from home.  A youngster with a wise head on her young shoulders – Jude will do well back in Canada but will be missed by all (especially for having the world’s best poker face).

On Saturday night we met up with Jo and a few of her friends for a Greek meal in the Cool Docks area followed by a couple of drinks in the Glamour Bar on The Bund.  I’m not sure the Glamour Bar is really my cup of tea, being distinctly unglamorous as I am, but good to see Jo and Bron fitting in nicely…

We’ve had the Nixons visiting us in Shanghai this week; Chris to solve the world’s (well, Argos.cn’s) future infrastructure challenges, Mrs Chris to fill as many suitcases as possible with gifts to take back to the UK.  Great to see them both – and good to finally introduce Chris to the Shanghai Brewery on Tuesday night, complete with free horror cakes for Halloween (free for the ladies, but woefully neglected by the ladies, so I helped out). 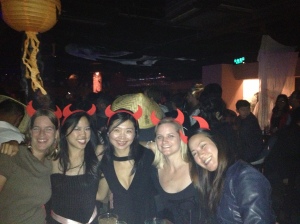 Bron and the girls in the Mural Bar

And speaking of Halloween, Rachel dragged a few of us out on Wednesday night to a Halloween bash in the Mural bar.  Good value for the ladies (£3 to get in and free drinks all night long), not so good for the blokes (£5 to get in including one free drink only).  Plenty of weird outfits, and free horns for the ladies.  A curmudgeonly old git; no dressing up for me.

Akin to a scene from Terry Gilliam’s Brazil**, a few workmen came over on Wednesday to switch our heating on.  In the roof terrace is a strange cubbyhole consisting of pipes, knobs, extension cables, hosepipes and several more pipes.  Activating the heating system would therefore seem to consist of attaching hosepipes to pipes, moving a few dials, draining a little water onto the floor and into other pipes, and repeating the process several times until a consensus of nods is reached.  It is either on or off – no thermostats here.  But we’re apparently fortunate to have heating at all, in which case manually fiddling with radiators when we need a little heat doesn’t feel like too much of a chore.

A workman is here at the moment (Sunday morning) to takeaway the doorbell to fix it.  I’m not sure how we’ll know when he’s bringing it back.

Later today it’s back to the Cool Docks area for an Indian lunch (buffet hopefully) with Chong.  So that should do us nicely for the rest of the day… Sundays are definitely becoming single-meal days…

Pollution, what pollution (from iPhone App).

And not end on a downer, but Autumn can be bloody miserable here.  The decaying, dying leaves seem to beckon down layers of pollution onto Shanghai.  To look out of the window in the daytime is to be confronted by a wall of grey; the dirt of the city normally obscured by sunlight becomes highlighted in the murk.  Maybe we should only go out at night.

**This only a slight exaggeration, honest.

Me & Jude in the Vue Bar. The very dark Vue Bar.

Jude, Judy and Anny in the Vue Bar