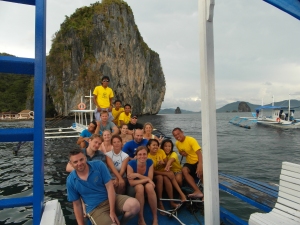 The crew and guests on the Tao Phillipines tour

On the Tao Philippines website, the booking procedure includes an extra step which  asks: ‘Are you sure you want to do this? It’s not for everyone’. Looking back, the last four nights of our holiday at the all-inclusive luxury resort on Lagen island, with its air-conditioned rooms, cocktail bars and large pool, couldn’t have been much more different to the previous four with Romy and crew aboard the Tao Philippines boat.

We met up in Coron: Romy and his six crew members along with 10 guests (2 Brits, 3 Aussies, 2 Dutch, a Swede, a Slovakian and an American; there’s always an American), to board our floating temporary home for the next 5 days.  The plan was a simple one – to travel from Coron on Busuanga Island to El Nido on Palawan, stopping at different locations along the way and sleeping in a different place on each of our 4 nights.  Most of the crew slept onboard whilst the guests stayed in huts on beaches; in mangroves; in small villages, all safely covered by mosquito nets.

On the Tao website it states alcohol can be purchased prior to the trip, and helpfully offers the advice ‘Guests should not drink too much in the sun’.  What it failed to mention was that Romy would, without fail, start each evening with a round or two of his signature cocktail: ‘Sundowner’.  A simple but effective cocktail consisting of rum and pineapple juice, mixed at the simple but effective ratio of 50/50. This is rum (‘rhum’) purchased locally for 90 pesos – around £1.50 for a bottle of rum that would be at least 10 times as much in the UK.

Michelle (American) and the Aussie blokes (Guy and Michael) were never shy of joining Bron and I for a few drinks.  A couple of glorious hours sat in the sea, beer or cocktail in hand, taking in the scenery and contemplating our options for retiring early and moving to where it never gets cold and hunger can be solved with a fishing rod. Or an ability to climb coconut trees.

We snorkeled for hours, both with and against the sea’s current (the latter a little disconcerting for those – me and Bron – without fins, when swimming furiously does little other than to hold position in the sea).  I would try to describe what we saw but my knowledge of coral and its inhabitants is so poor it would be like a dolphin attempting to describe a jungle.  What I will say is that I had no idea life underwater was so colourful – blue starfish, Nemo-type fish and purple coral were amongst the many highlights. Also colourful were the backs of my legs – a little suncream insufficient to cope with the sun when magnified by water onto the most exposed part of my body for an extended period of time. The ladies suffered a different problem: ‘sunburned bottom’ I think being the most polite way of phrasing it.

Coral can be dangerous, especially if stepped on whilst attempting to help push our stranded boat back into this sea.  ‘Make sure you clean out that cut,’ offers Guy helpfully, ‘Coral is a living organism and can grow inside you’.  My coral cut added to the injuries already encountered through many mosquito and other insect bites, cuts from crashing into the boat’s ladder and eventually, copying Bronwen by being attacked by a somewhat territorial fish.  Fortunately, we both managed to avoid the jellyfish.

Bron and I had visions of going hungry whilst out at sea; we needn’t have worried – the boat’s cooks did a fantastic job of keeping us fully fed with huge, fresh meals three times a day interspersed with all manner of snacks.  From freshly caught fish, breakfasts of mango, banana and porridge eaten from a fresh coconut to local fruit and vegetables we’d never previously encountered.   And of courses the banana ketchup, a sauce to accompany any Filipino dish.  On our last night, Romy had arranged a spit roast pig, cooked to perfection by some of the local villagers in our final sleepover location.  Eating crackling straight from the pig wasn’t something I’d tried before…

Romy’s filleting skills were also called into action on a few occasions. Fish is caught whilst the boat is out at sea; fish is killed and prepared by Romy; fish arrives as sashimi 5 minutes later.

Food and drinks onboard are kept cool by huge chunks of ice, purchased from dedicated ice factories -the sign outside our chosen ice source stated simply: ‘Mall of Ice’.  They had a job vacancy for an ‘Ice man’, but without a decent job description I didn’t bother applying.  Especially after seeing the huge blocks of ice, carried single-handed by Romy.

Sleep was hard to come by – the temperature at night retained most of the heat from the day, and the mosquito nets absorbed most of what little breeze was on offer. The full moon seemed to keep most of the wildlife awake, from cicadas chorusing in union at irregular intervals to geckos chanting their name throughout the night (they do – ‘GEH-ko’ repeated over and over, stopping only when you’ve nearly, but not quite, discovered their hiding spot, thus avoiding strangulation). And the bloody cockerels. Everywhere. And not just at dawn.

For a foreign tourist, life out in the open leads to a ritual of lotions: sun lotion first thing and repeated throughout the day;  insect repellent at dusk in an attempt to keep biting creatures at bay; after-bite cream when it doesn’t work; shower gel at night to wash the whole lot off again.

The evenings were mainly spent eating (with a little drinking) although our penultimate evening ended in the world’s smallest karaoke bar (a little further down the beach from our huts) with the world’s largest selection of songs.  Accompanied by Romy and John (the owner/security guard – a man with 14 children and over 70 grandchildren), Bron, Michael, Michelle and I tried a few classics whilst Guy impressed us all with his Filipino rap song.

Our last meal was preceded by another first for me – a massage on the beach.  Organised by Romy, a few of us partook in the sensational experience of a massage near the sea under cover of palm trees.  Maybe a little too relaxing since it nearly sent us all to sleep.

A fantastic 5 day experience; many thanks to Romy and the crew, and to our fellow guests: Kris, Joanne, Julia, Michelle, Guy, Michael, Jonas and Katarina (who introduced me to starfish-phobia) for keeping us entertained.

Onboard our Tao Philippines boat – with Joanna, Michelle, Guy, Michael, me, Bron and Cris

Our beach for the evening

Yet another isolated beach, just for us

Bron and Michelle on our isolated beach

On our way to the evening’s accommodation

Dinner lighting provided by beer bottles and a little kerosene

Breakfast eaten from a coconut

Bron giving it everything in the world’s smallest KTV bar

Our boat after sunset

At sea, with a tornado passing by

Approaching the “Mall of Ice”

I was tempted to apply…

Shower facilities at one of our overnight stays

Sleeping accommodation on the last night of our tour

Our host – Romy – and his wife

The crew and guests on the Tao Phillipines tour