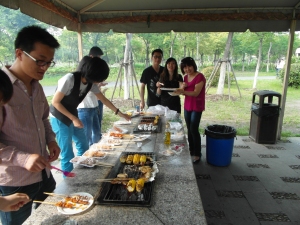 The chefs at work

Back home in the UK, a barbecue is normally a back-garden affair, featuring burnt sausages, potato salads and wasps.  In Shanghai, gardens are hard to come by (apart from those living in Pudong), and instead a number of parks have “barbecue pits” allowing friends and family to gather and cook together in the late-spring heat.

So, to end our last weekend in China, on Sunday afternoon we met up with a few of our local friends (ex-colleagues, ex-pats, ex-language teachers) and their families in Gucun Forest Park, out in the northern suburbs of Shanghai.  Hiring a “VIP” barbecue pit seemed the sensible idea given the close proximity of those attempting to cook in the other areas of the park.  An on-site supermarket allows visitors to stock-up on everything required for an elaborate barbecue (from chopsticks and plastic cups through to chicken and liver on a stick). 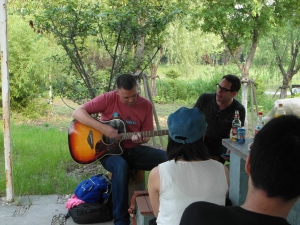 Our last ever performance

Many “last” moments at the moment: playing a short acoustic set with Felix after the barbecue (of our 13 songs, we played the 8 that we could remember most of) for – probably – the last time ever was another of my many highlights of our Chinese experience.  Our audience grew slightly from our group of 30 or so as the staff waited for us to finish the noise and allow them to get in to clear up.  Thanks to all our guests for allowing Felix and I to perform; hopefully some of you enjoyed it!

A fantastic way to end our last weekend – China continues to provide new experiences right until the end.

Our barbecue followed a Saturday night meal out in El Patio, a Spanish-themed bar featuring expensive but tasty tapas alongside ridiculously expensive water (nearly £5 per bottle – something we discovered at the end of the meal after drinking 7 bottles).  The night ended in the Shanghai Brewery – time for one last pint of on-premise brewed stout.

In the VIP barbecue area

Our last ever performance

Felix giving it everything

Some guests enjoyed the music more than others

Farewell to our language teacher – Fiona

The chefs at work

Being attacked by a bubble blower

After the barbecue with Helke, Steffi, Felix, Stefan and Bron

Tasty sugarcane near the warehouse

“Do you know what this plant is?” asks Anny, our local Finance Director.  I didn’t.  Anny speaks to one of the warehouse blokes accompanying us; he disappears and returns with a cleaver.  Plant is chopped.  Plant is stripped with teeth.  Plant is eaten.
I’ve never eaten raw sugar cane before, so didn’t know to expect a large residual amount of plant matter to remain in my mouth despite frantically chewing it for ages.  Eventually Anny tells me you’re not supposed to swallow it.

The sugar cane picking (/slicing?) was in a field at the back of the Argos warehouse, a 90 minute drive from the office.  The field is bordered by a row of old-looking houses, one of which we visited for lunch.  There’s apparently a specific Chinese word for this type of establishment (which I’ve already forgotten) that allows travellers (or warehouse staff) to eat, sleep and play card games/Mahjong but it’s neither a hotel nor a restaurant.   Cooked from scratch by the friendly chef/owner, our food on Friday lunchtime was far tastier than that served in many “proper” restaurants here in Shanghai.  And far cheaper.  I’d go so far as to say “Probably the best food in a field near a warehouse I’ve ever had in my life”.

Friday evening’s promised meal of “street food” was tasty enough, but didn’t quite live up to its billing.  As Haydn observed, the restaurant was on a street, but that’s about it.  I think we’re obviously missing something here, but to order, the customers seemed to have to leave the building, walk down the street a little, point to some food through a window (being barbecued) then go back into the restaurant.  An entertaining evening with Haydn, Bronwen, Alex and a few of the marketing team; we learned several new Chinese swear words that won’t be appearing on the blog anytime soon. 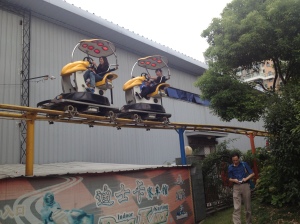 Out to a big park on Saturday daytime with Rachel and her friend.  Shanghai has several of these parks tucked away in its nether regions, all offering something slightly different.  This one featured very sinister looking Donald Duck and Mickey Mouse copies, and a pedal powered mini-roller coaster type thing.  I’m told these sorts of rides are available in the UK, but it was new to me.   We also had a ride on the world’s shortest scary roller coaster.  Scary because Chinese roller coasters aimed at kids aren’t sized for Western men (yes, my fault, I know).  The barrier that holds you in holds you in.  Very snugly.  Very, very snugly.
We needed the excitement after zooming around the park’s lake in our turbo-powered speedboat.  Zooming at 7kmph max speed.

All week, barriers, hoardings and mini-grandstands have been appearing on one of the main roads near our house.  All the signage has been in Chinese with no mention of the event in any of the usual ex-pat magazines, other than to say the road was going to be closed on Saturday night.  So, early Saturday evening, I dragged Bronwen, John and Alex down to see what was going on.  The friendly policeman understood my flaky Mandarin question of “What is this festival?” but inevitably the response was a stream of Mandarin I couldn’t understand.  Ever helpful, he phoned a friend, chatted for 5 minutes and then, beaming with pride and in beautifully spoken English, said “It is China festival!”

Alex, John and Bron watching the floats go by

So on Saturday night, we saw several floats go by, a few dancers dancing, crowds of people watching and all we really know is that it was a festival in China.

Tasty sugarcane near the warehouse

Our restaurant for lunch

Sinister, but not as bad as Donald…

Welcoming kids to a boat near you…

From this angle, I’m hoping we successfully captured the speed…

Floating cars, but not quite Chitty Chitty Bang Bang

A float at the “China Festival”

Alex, John and Bron watching the floats go by