Nicole and Bron out on a glass platform

Late in the evening, pouring with rain, dark and foggy; I’m grateful we couldn’t see much through the coach window as we gradually ascended towards our Moganshan country house.  I’m not sure how the coach driver could see much either but he got us there somehow.  Moganshan is a mountain (719 metres high) about 200km from Shanghai, and has a national park much beloved (according to our guide) of senior Chinese state officials.  Even when it’s cold, wet and windy it’s a beautiful place.  It has fresh air, rolling hills and a luscious, green landscape: all the things Shanghai doesn’t have.

As part of an Internations group of around 30 people, we arrived late on Friday evening following our 4 hour coach journey to be met with a local cuisine delicacy – beef bourguignon.  Sadly, no local Moganshan beer available; instead a couple of QingDaos and off to bed for a relatively early night in anticipation of the early rise on Saturday.

Bron and Anca on the somewhat wobbly bridge

We’d made the right decision to bring walking boots with us, since what we thought might just be a minor stroll around the local sights turned into a circa 10 mile hike*.  Picking leaves off the tea shrubs/bushes/plants (whatever they’re called) lost its appeal when the guide told us we’d need to pick about 8000 leaves** to make enough for a single decent cuppa.  Lunch in a local restaurant somewhere near the top of the mountain with pre-picked tea was an eminently more sensible idea. 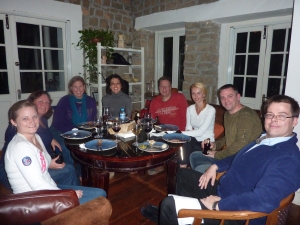 Bron and the gang in the house

We were given an additional tour in the afternoon by a British Bloke living locally: Mark Kitto, author of a book called “China Cuckoo”.  A few insights into the ups and downs of an ambitious, but foreign, entrepreneur trying to do business in China and hitting, well, a few stumbling blocks.

Back to the house in the evening for a home-cooked meal from Shanghai chef Tomer Bar Meir – we’ve yet to visit his restaurant but will probably do so now.  Skye, owner of the most exotic of dance moves, yet again proved his dancing prowess to the amusement/bemusement of all.  An interesting mix of people in this trip, but just seven blokes.  If any single men in Shanghai are reading this – you need to be heading out on a few Internations trips.

With the weather massively improved on Sunday morning, we ignored the urge to stay in bed to sleep off any of the previous night’s excesses to head out for another walk – much shorter this time.   With much better views in the sunshine, I’m glad we did.

As is becoming normal with these Internations trips, we’ve met a great bunch of people that we’ll hopefully meet up with again soon.  Two young British girls were also there (recent graduates, working in Shanghai for their first jobs) and despite their offer to go out clubbing, I graciously declined after pointing out I was nearly twice their age.

All in all an excellent weekend – thanks to Skye and Yael for organising and hosting.  And thanks to Nicole for providing Saturday evening’s late-night entertainment (doubtless unintentional!).

Hannah, Marcel and Bron in Closless

Back in Shanghai; in previous posts I’ve mentioned a cocktail bar near us with about 10 seats in it.  On Tuesday night (following a curry in Tikka, our closest Indian restaurant) we took Marcel and Hannah there, but all the seats were fully occupied.  We’d always been aware there was some kind of small room at the other end of the bar but figured it was a private lounge or something.  It isn’t – we were ushered into the tiny room on Tuesday night to discover the walls were adorned with tasteful (honest!) photos of bums and boobs.  Hannah: “What have you brought us here for?  It’s like a sex room!”.  Admittedly, the blankets available for use by its patrons didn’t help.

On Thursday we received a parcel in the post from Rhian.  Shreddies, biscuits, shower gel and a few other British goodies – a fantastic surprise; thank you Rhian.  We were like kids on Christmas morning.

*Yes, I know some people run 10 miles on a Saturday morning and think nothing of it.  But we’re normal.

**I forget the exact figure.  Probably slightly less than that.

Hannah, Marcel and Bron in Closless

Bron in front of our house in Moganshan

In front of this guy was the back of the oven. His job was to keep the oven warm.

A field of tea…

Amidst the tea plants

Bron and the gang in the house

Me and Bron out on the viewing platform

Bron and Anca on the somewhat wobbly bridge

Me, Anca, Yael and Felix out on the glass platform

Nicole and Bron out on the glass platform in Moganshan