In the middle of an unassuming residential district, several Metro stops away from where we live, we find Bhoomi Stores.  Not quite the golden palace of Indian goods we’d hoped for, but good enough to replace most of Indian spices, snacks and other curry-related goods we’d either left behind or abandoned in the heat.  Well worth the effort to find it; we will definitely head back. 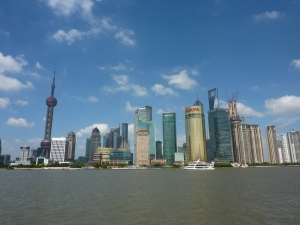 Shanghai has had what most people would probably consider to be perfect summer weather this weekend.  Two consecutive days of smogless blue skies is pretty much unheard of, along with stars visible in the night sky (the first time I can remember seeing stars since walking into the fire escape a few weeks’ ago).  We took advantage of the sunny sky to head over to the Bund area in an attempt to capture Shanghai’s famous skyline with a backdrop other than grey.  Bron then had undoubtedly the highlight of her trip to Shanghai so far, experiencing the world famous Bund Sightseeing Tunnel.  Without a doubt Shanghai’s best tourist attraction, visitors pay the tiny fee or £5 each to experience a 2 minute journey observing different coloured bulbs in a tunnel.*

We took a gamble that mid-afternoon on Saturday might have been late enough for the queues to reach the observation deck of the Shanghai World Financial Centre (all 492 metres of it) to die down.  Sadly not: we decided against queuing for hours in the blazing sun, instead settling for an ice cream and an air conditioned taxi ride home.

As for our evenings, a hectic but thoroughly enjoyable weekend saw Friday night begin at De Refter with JB, Richard, Elousie and Ryan, followed by a few games of pool in a Japanese Sports bar.  I have no idea if most Japanese sports bars are taken up with huge electronic dartboard areas, but this one was.  We decamped to Masse, another sports bar, shortly afterwards to spend a few hours playing pool at ever-decreasing levels of skill. 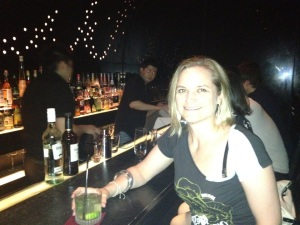 We met up with Isaac and Chong, a couple we’d met on the Wuxi away weekend, for a Japanese meal at Bankura on Saturday night.  A cosy restaurant with excellent food, followed by a drink in what has to be Shanghai’s quietest pub – the Yesterday Pub.  To be told it was normally busy during the working week wasn’t entirely convincing since we were as the only punters there until just before we left.  Bron and I had a sneaky stop-off in Closless, a Japanese shot bar on the way home.  Closless is tiny, consisting of just a bar with 12 or so seats, but the cocktails were perfectly formed. 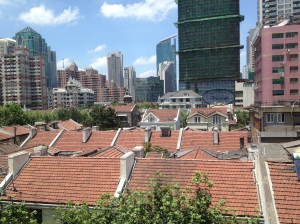 Can you spot our house?

Ann and Emily came over to see us on Sunday lunchtime, without Ian who had returned to the UK with a stomach apparently still fighting to regain some semblance of normality.  A man made of strong stuff, Ian did well to explore so much of Shanghai and vicinity with the constant anxiety of always needing to be within about 20 feet of a toilet.  We took Ann to lunch in Masse – pool bar by night, civilised brunch/lunch establishment by day.  With the added bonus for us of being able to see our house from its windows.

To round off the weekend, on Sunday evening we met up with Simone (again somebody we met at the Wuxi weekend) for a Mexican meal in Maya, a somewhat posh restaurant hidden away in an apartment complex near our house.  A Mexican restaurant selling Youngs Double Chocolate Stout is always going to be a winner for me.  This idea of stopping eating/drinking out so much has yet to come to fruition.

*Words cannot do this tourist attraction true justice.  It has to be experienced to be believed.  But if you ever come out here to visit us, we’ll get a taxi and meet you at the other end.

Further view of the Huangpu river in Shanghai

Bron against the Pudong skyline

View of The Bund

Inside the Bund Sightseeing Tunnel.

Can you spot our house?