Publicly ackowledging a dislike for cheese generally produces a look of abject horror and disbelief matched only by the sheer bewilderment shown when I disclose I’m also not particularly fond of wine.  It’s as if my taste buds were somehow poorly educated, or that I must simply be mistaken.  With this in mind, I head to a wine tasting event on Friday evening with more than a little trepidation (it’s not oenophobia by the way; although I am slightly scared of wine snobs).

Organised by Juliane, my attendance was more of an attempt to be sociable rather than an attempt to become a wine convert.  I lasted roughly ten minutes of hearing tales of wines smelling of plasters (or “Band-aids”), excessive tannins and appellation aberrations before coming clean and revealing my wine ignorance.  It didn’t stop me trying out a few different selections though, with Flo (Nicole’s other half) helping to keep the wine flowing.  Despite still not knowing the first thing about wine, a great bunch of people made for an excellent evening.   The considered expert conclusion from two hours of wine drinking: I really don’t like white wine but the red stuff isn’t too bad.  It’d be far better cold though.

At Nova in the Cool Docks with Kelvin, Heather, JB and Kong

It was back to the Cool Docks on Tuesday night (imagined Shanghai committee discussion: “I wonder what we can call this transformed dock area to make it sound really cool?”) for a meal with JB and Heather, Kelvin and Kong from Brainchild at the Nova restaurant.  Great setting, great company, but French cuisine at its fattiest.

After discovering there are other Westerners working up in Yang Pu, on Wednesday lunchtime we met up with Nicole and Flo along with Lea, a British colleague of Nicole’s.  Walking to a restaurant in work attire in 35 degree heat is not a pleasurable experience.  Walking back to the office stuffed full of far too much food even less so.  A thoroughly enjoyable lunch, although the habit of putting the cooked chicken’s head on the serving dish to prove the full chicken has been served really isn’t required.

A subtle way of displaying loyalty at a Man Utd game

Another of those “one to chalk off” experiences on Wednesday evening – seeing local football side Shanghai Shenhua play Manchester United at the Shanghai Stadium.  Manchester United’s team of castouts, newcomers and fading stars scraped a one-nil victory in a pretty appalling game.  Inevitably most of the local support was not for the local team, with countless Rooney and Scholes shirts on display.  A few strange looks for me and Tim, but we’d never get away with wearing t-shirts emblazoned with LFC crests at a Man Utd game anywhere else.  An interesting use of police at the stadium; in the UK the police spend the entire match watching the crowd.  In Shanghai the police sit motionless in uniform rows of plastic chairs entirely focussed on the game.

We met up with Carmen and her husband Danny on Thursday night in Shintori, one of several Japanese restaurants near to where we live.  Fairly pricy but always tasty, its cavernous, industrial interior provides a perfect counterbalance to the intricate detail of its food servings*.

Bron, Carmen and Danny at People’s 7

Next door to Shintori lies People’s 7, a bar requiring its visitors to know a particular code combination to gain entrance.  Nine arm-sized holes into which guests must place their arm in the correct sequence.  That, or just continually sticking your hand in different holes until something happens, which is what Bronwen and Carmen did.  I’m not sure what I was expecting, but the elaborate method to open the door seemed to imply the interior would be equally imaginative.  Alas, we were greeted with a fairly standard bar with the staff dispensing cocktails perfunctorily.  With the toilet rolls outside the cubicles, Bronwen and Carmen pointed out that the ladies loos offered a different sort of challenge (although I’m told this happens in some other bars too).

So after a night of Japanese food and cocktails we finished Thursday night with Japanese darts, electronic style.  Apparently a big fan of darts, Danny insisted (although I didn’t take much convincing) on visiting the Japanese bar near our house that specialises in huge interconnected electronic dartboards (allowing people to play against opponents in other locations).  I have a natural British aversion to anything other than “proper” darts, but there’s a lot to be said for having the scores automatically calculated for you.  Especially after a few drinks.

Following Friday’s wine tasting experience, the 12 of us still standing hopped into three taxis and headed to another Japanese restaurant, Fount,  for an outdoor meal.  I have little memory of whether the food was palatable, but great to spend time with Juliane and several others we’re getting to know (Helke, Simone, Nicole and Flo). 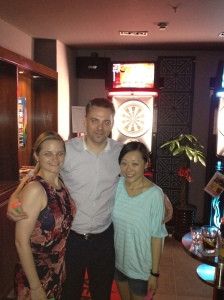 3am in a Japanese sports bar… Looking tired entirely justified…

And in an effort to hone my darts skills (since it’s obvious I need more practice), following the wine tasting and Japanese food, we’d arranged to meet up with Carmen and Danny back at the darts bar at 11.30pm.  Carmen’s Dad was also here visiting, and will no doubt think again before taking on a Brit at pool (my pool skills being similar to my darts skills – pretty lousy, but the law of averages says I’ll fluke the odd game).  Over three hours later, we let the staff close the bar and went home.

Bed just after 3am.  Five hours sleep.  Back in a cocktail bar on Saturday night at 7pm.  A less frenetic but equally enjoyable evening with Jo and Bron; a good old fashioned roast (although I’m sure they’d call it modern) at Mr Willis and a quick nightcap in Closless (who seem to have lost chairs – I’m sure they could seat 14 the last time we were there – this time only 10) to end the night.

*(sorry, not tying to be pretentious, just trying to paint a picture!).

View of Pudong from the Cool Docks

At Nova in the Cool Docks with Kelvin, Heather, JB and Kong

A subtle way of displaying loyalty at a Man Utd game

Plenty of Man Utd tops; not very many Shanghai Shenhua…

Not normally my thing – raw fish…

With Carmen and Danny at Shintori

The chefs at work in Shintori

Bron, Carmen and Danny at People’s 7

Outside at Fount (we’re there at the back, somewhere)

3am in a Japanese sports bar… Looking tired entirely justified…