And so it ends.

With somewhat of a shorter trip than planned, Bronwen and I will be returning home to the UK within the next couple of months (no, I’m not going to go into further detail on why within this blog).

Inevitably we have mixed feelings on this – psychologically not quite ready to return yet, but will obviously be happy to be home.  Particularly as the UK economy is now looking so rosy and none of the credit agencies are entertaining the idea of downgrading the UK’s credit rating.  Oh.

So following JB’s week of leaving events, Richard consoled a few of us on Monday night by agreeing to lose at pool to  the fearsome team of me and Bron (following a curry).  We will no doubt see Richard again when back in the UK, but it’s on nights like we realise we have little time left to spend with our Chinese friends and our other expat friends we’ve met locally.  We broke the news to Andrea and Grace on Tuesday night at yet another curry (with Rachel), and will no doubt have many more nights like this one over the coming weeks.

Felix came over tonight for a band session.  Yet another reason to be gutted about leaving Shanghai, since (recognising this is a somewhat biased opinion) we have a few cracking songs.  And some even better ones.  We’ll try and record them all before Bron and I leave and force them on the world a little later.

The blog will live on until we return.   I may kill it soon after. 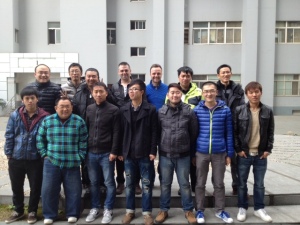 Me, Tim, and the boys from IT